Kate had to return to port with her passengers so WET℠ stayed with the whale to monitor and do assessment of the entanglement while the rest of the network team responders assembled. While observing the humpback whale, it began feeding in a typical manner called lateral lunge feeding. This is where the whale pushes fish to the surface and lunges through a shoal of prey with its mouth gaping open, exploding at the surface on its side. The Monterey Bay National Marine Sanctuary is a primary feeding ground for humpback whales and many other species of whales and dolphins.
Click here to see a video of the entangled whale feeding

Click the button to the left to donate. If you rather make a donation directly to Marine Life Studies,
you can donate by check and mail to:
Marine Life Studies' WET, PO Box 163, Moss Landing, CA 95039
Scott attached the telemetry buoy to the fishing gear trailing behind the whale with the help of Karin; and JD's excellent skills as captain (photo left). They proceeded to capture underwater footage of the blue steel line that was wrapped under the tail stock of the whale and over top of its fluke.
click here to see a video of scott attaching the telemetry buoy
Scott then boarded our Whale Rescue Research Vessel to view the video he shot and photos of the whale taken during our assessment. Stephanie took screen shots of the video showing the entanglement (photos below). Then she sent them to NOAA and Pieter Folkens, our Level 4 for northern California to review. Scott conferred with NOAA entanglement specialists, Jamison Smith, Justin Viezbicke, and Ed Lyman along with Pieter to develop the protocol for cutting the line free. Every entanglement is different, so careful planning is needed to ensure the safety of the whale and the responders during the cutting process. 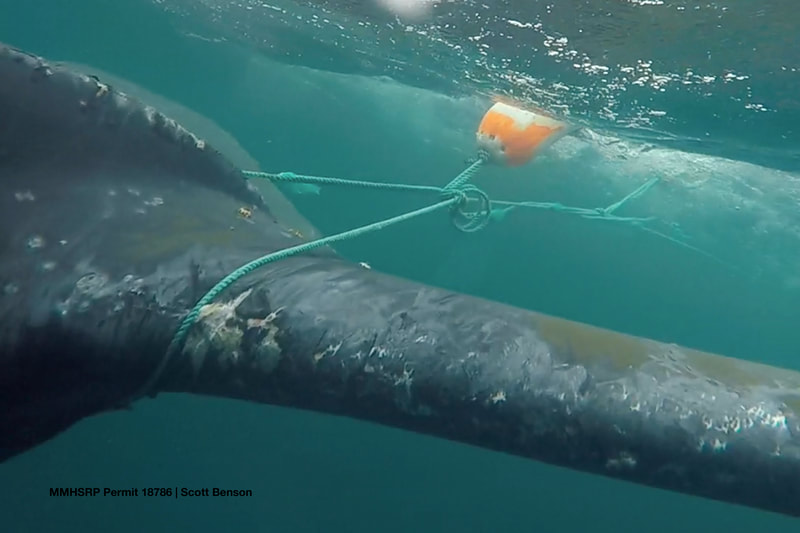 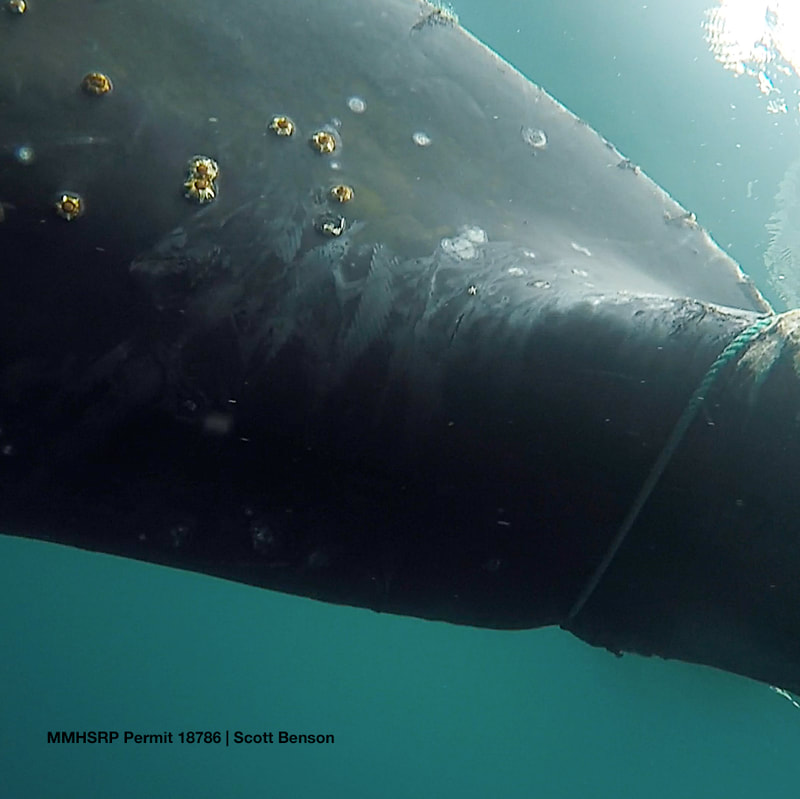 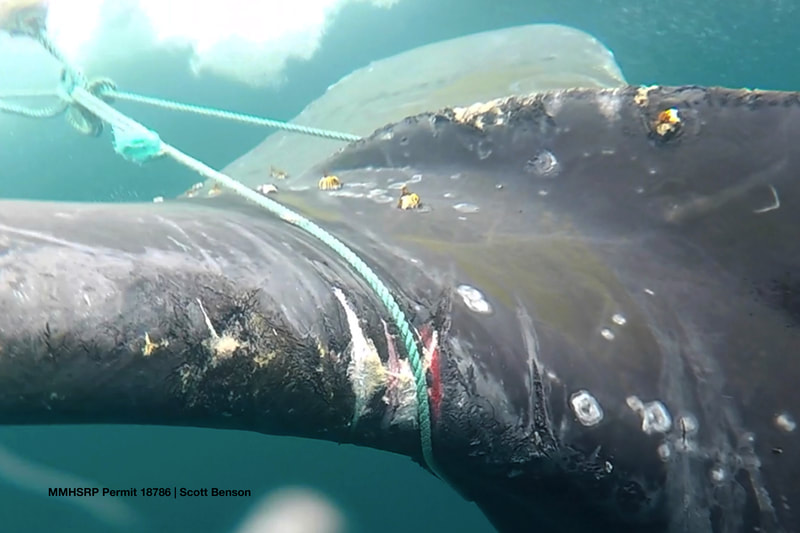 Click here to see the video of the fin whale surfacing
Once Scott received the authorization from NOAA to make the cut, the specialized cutting tools were then transferred from our Whale Rescue Research Vessel to the ZHT rib where Scott, Karin, and JD prepared the tools and approached the whale to make the cut. The plan was successful and Scott was able to make the cut that freed the whale. It was an exciting moment for all of us to see the humpback whale continue swimming south free of the gear. Hooray!

We want to thank fisherman Calder Deyerle and his 5-year old son, Miles, for staying with the whale until rescuers arrived as that is so important and made this a successful disentanglement that freed the whale. Thank you Calder and Miles!

How you can help if you see an entangled whale:

Report immediately, call 877-SOS-WHALE (877-767-9425) or hail the U.S. Coast Guard on VHF CH-16.
If possible, please stay with the animal while maintaining 100 yards distance from the animal. Authorized personnel will guide you as what to do next. ​
Provide the following information to help authorized responders: All whale rescues are permitted under NOAA’s Marine Mammal Health and Stranding Response Program (MMHSRP) by trained teams sanctioned by NOAA.

Learn more about WET® and how you can help. ​
Donate