​The Story of “Whiskie the Whale Spotter™"

When I saw this little sweet dog in the pen she started jumping up and down, clearing the floor by five feet! It was if she was saying, “Pick me, pick me.” There was no history on her, but the sign on her pen said she was a young adult, boxer/shepherd mix and she weighed 27 lbs. (Later, we realized she was much younger than they thought as she doubled in size, so we think she was more like 4 or 5 months old. We think she has some Rhodesian Ridgeback in her.)

I fell in love with her and told her I would take her home, but we had to wait 10 days to see if anyone claimed her. During the waiting period, I would go up and walk her and on the weekend, I took my husband Dick up to see her – he fell in love with her, too. No one claimed her so we got to adopt her! She is so sweet and loving. Whiskie is so comical that she makes us laugh a lot - she brings so much joy into our lives.
Since she had no history, she also had no name. For three days we tried different names and she would not pay attention to them. Then one day we were sitting on our deck and Whiskie was lying with her head pointing away from us taking in the scenery. Dick, said, “Well, she is the color of Whiskey.” So I called out “Whiskey”, and she turned her head in acknowledgement; so the name stuck.

She immediately became a loved and loving member of our family. She had only been with us a few days when my niece brought her little boy, Dylan, who was about 2 at the time. Whiskie was lying down on the floor next to the couch when Dylan walked by and fell right on top of Whiskie! Of course, my niece and I freaked out as I didn’t know how Whiskie would react. But, Whiskie didn’t move – she just turned her head toward Dylan’s face and licked him. At that moment I knew we had a very special dog.

Whiskie is very smart and so good with kids and people. I thought it would be nice to train Whiskie so I could take her to nursing homes and hospitals. I took her through series of dog training courses, and I also taught her whale tricks, like breaching, swimming and spy hopping that she performs. She is always a big hit!

Whiskie listening to the hydrophone

When I see a large group of Risso’s, I know that there are Northern Right Whale Dolphins in the area before we even spot them, just by how Whiskie is acting. The sounds they make have a higher squeaky pitch and I’m pretty sure Whiskie hears that. Plus, they love to bow ride and Whiskie loves to watch them. It’s amazing to watch the dolphins turn on their side and look up at Whiskie.

​Check out Whiskie in action!

Whiskie, a shelter dog rescued by Peggy Stap of Marine Life Studies, has uncanny ability to spot whales and dolphins which is a real asset to Peggy Stap's work in the Monterey Bay National Marine Sanctuary as a marine mammal researcher. 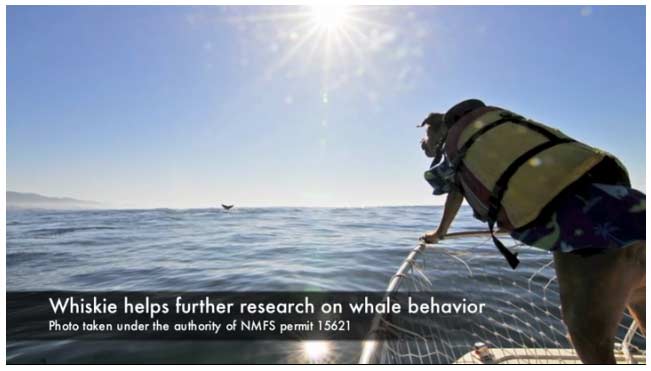 Check out video on Whiskie's story by the Salinas Californian
Donate